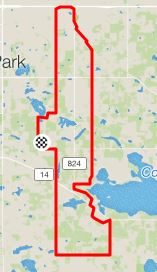 The Saturday route will still start 10am at the Olympiette Centre. But I’ve drawn a new circuit. It heads south east to South Cooking Lake. Then it continues in a counterclockwise direction up north through Ardrossan. It won’t cross HWY 16, but runs west, parallel to HWY 16 before hitting RR 223 to make its way back to the Olympiette Centre.

The Sunday route moves a bit further west. It now starts at the Acheson PetroCan/Truck Stop area, 10am. This Truck Stop is at the intersection of HWY 16 and HWY 60. The route stays off all the major highways, and heads west to the rolling Glory Hills area.

This is a longer circuit, 70km better suited to intermediate and advanced riders. See the EVENT

Nonetheless, Colleen put herself on the podium in the Women’s Master B Time Trial, winning the Bronze medal!

Ed Heacock and Dave Watson achieved top 10 placings in their events, which were contested by a deep and very strong Master D field.

An Early Father’s Day Ride with the Dawnpatrol

Dawnpatrol rider Dayton Danielson has invited all the dads out there to a 6AM Father’s Day Ride this Sunday morning. Meet in front of the Sugarbowl Cafe – 10922 88 Ave NW, Edmonton.

So, if you have a Father’s Day Brunch planned and can’t make it to our own club ride … or if you want to have two awesome rides that day … tag along with the Dawnpatrol! At that early hour on a Sunday, you can ride many of Edmonton’s challenging river valley roads with nearly no road traffic.

Congrats to Roy Robinson who won the free entry give away last week. Enjoy your fondo this weekend Roy!

Roy was the first entry last week to send me the address of our monthly meeting this week. Which is actually a BBQ at Ed’s house:

Location – 7231-112 St (Ed’s House)
Date – Tuesday June 18
Time – 6:30 BBQ followed by club meeting
What to bring – lawn chair
Who to bring – family members welcome
RSVP by email to heacock@planet.eon.net No later than Monday, June 17 – so we can have enough food and beverages on-hand.

Coach Absent This Next Week

I’ll be away this next week. So please don’t wait for me to start your rides!

Download the planned weekend routes (see Strava links at the beginning of this post), and be prepared to help lead the others as needed.

The general guidelines to consider if a ride is cancelled are:

Racers should consider riding even if it’s raining – because a race won’t be cancelled because of rain! But think twice before venturing out when the AQHI is 7 or worse.

All rides are posted on the event calendar.

Your mind will quit a thousand times before you body will. Feel the fear and do it anyway.